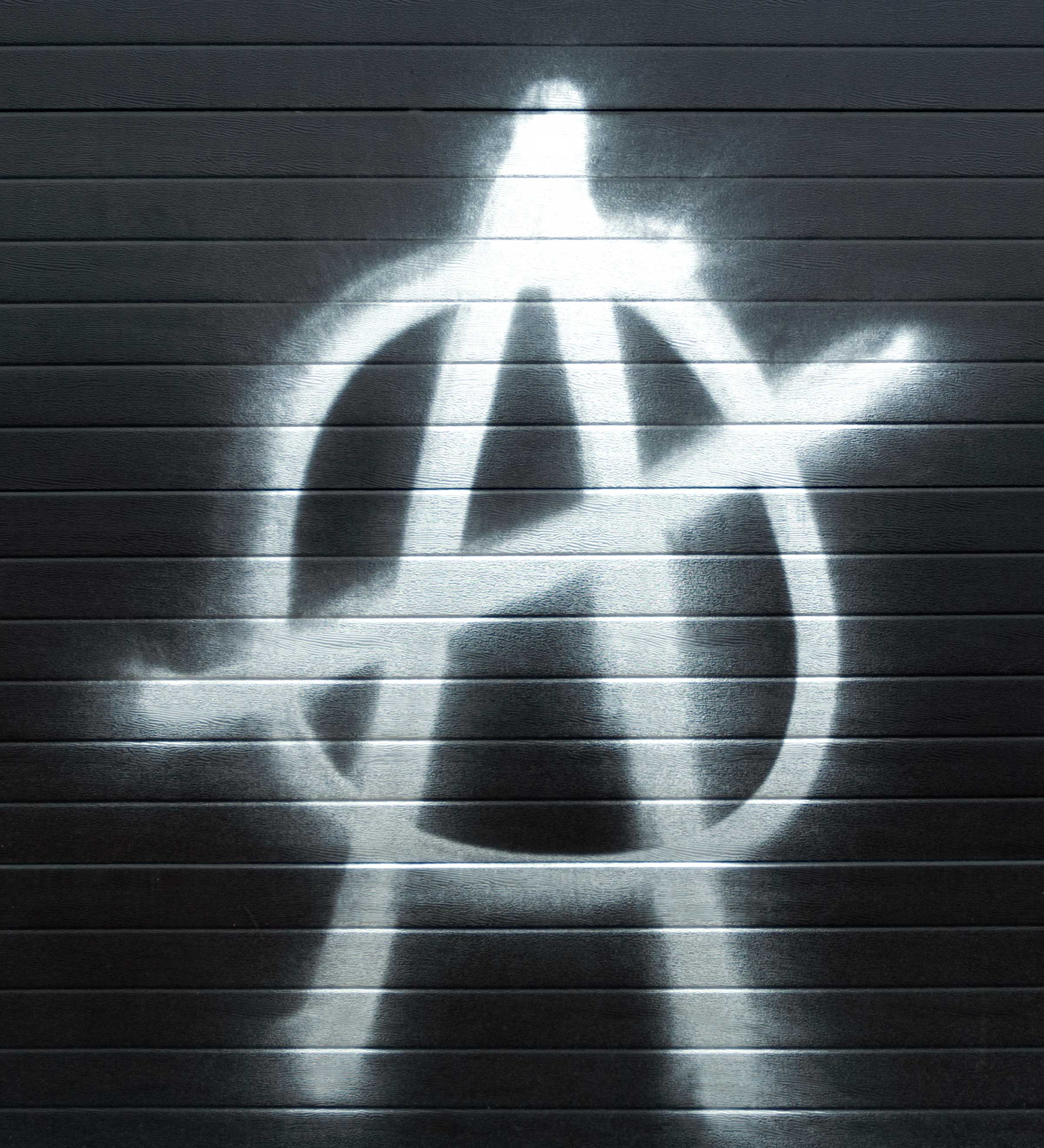 A Quick History of the Circle-A

As the group Antifa has suddenly become a household name and claimed the throne as public enemy #1 in the eyes of the White House, an old and familiar symbol has begun to flood the streets once again: the anarchy sign (or “circle-a”).  As it calls on its viewer to amplify any dissent they may be experiencing and tear down or overthrow established capitalism and government structures, it seemed like a good moment to dive into the history of this iconic and polarizing type treatment and its nearly 300 year old stay in the world.

The anarchy sign has somewhat of a murky past but in general the symbol’s first use is attributed to the Federal Council of Spain of the International Workers Association from in and around the 1860s. The organization was formed to essentially create unions that fight for the working class against capitalism and repression.

Breaking down the symbol’s form, there are two immediate shapes of an A and an O. (These would later be repurposed in the generalized and common modern version of the circle-a.) Anarchy as an ideology had obviously been around for quite some time, but here it had made its way center focus to the symbol.

The A here is tooled to seem hand crafted out of what could be interpreted as wood or a tool of measurement, representative of the working-class. Handmade forms similar to this are historically common to logos representing hard working people coming together under like-minded ideas. See “Hammer and Sickle.”

As the movement and then subsequent resurgence of calls for anarchy happened over decades, the original symbol was boiled down and it assumed its core meaning. The A representing anarchy and the the O representing order. To showcase this symbol one is meaning to convey “Society seeks order through anarchy.”

Or it could also be thought that the more this symbol is propagated, the more severe the failure in current society must be.

It wasn’t until the mid 1970s though, that the symbol truly took on its power.  The circle-a was the perfect unifying mark aligning to punk rock’s “wreck the system” tenets. Using spray paint, markers, collage and most importantly carbon copying, the anarchy sign made its way into everything from jackets to jeans to zines in this feisty new movement.

From a typographic standpoint, the mark at this moment seems almost perfect. The form finally matching its function. There were no longer any rules to it. And no two were the same because it had to be handmade by each individual. Proportion was tossed aside and all the harmony of the original mark was destroyed. The letters were now made in four fast strokes, attaching angry rage and civil unrest to a logo that originally looked quite timid.

It wasn't until the ‘80s that the symbol’s original form resurfaced in a real way. Crass, a deeply political anarcho-punk band, brought the ideology of true anarchism back to the forefront of the punk movement and in tow the original A/O type treatment with it.

The most recent evolution of the circle-a finds its more sophisticated form combined atop the main red/black anarchy flag. Utilized by Antifa, the flag’s color combination represents two main ideas: 1. An all black flag as the traditional anarchist flag (meant to signify opposition/resistance and be the invert of the all white “surrender” flag). 2. An all red flag meant to represent syndicalism and the general working class (the red memorializing blood spilled by fallen workers battling capitalist systems).

The symbol used in its newest form is perhaps its most intimidating thus far. Between the color combination and sterilized letterforms, the flag sadly invokes the Nazi flag when taken in by an uninformed viewer. Which can be very confusing considering the beliefs of those organizations stand polar opposite to one another.

However the meaning is meant to be taken as of late, the mark has returned to the public eye and media articles everywhere, back doing the work no other mark can come close to doing: Symbolizing the need for mass societal change and speaking out against the same forces of injustice that it has spoken out against for over 300 years.

Note: RIVAL LA claims no affiliation to any political party cited within this article. This is meant to explore designs from a historical perspective only.